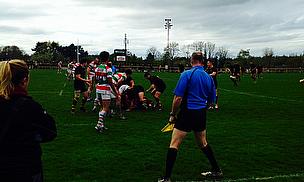 Stockport put in very good performance at Headlands Road, but were beaten 59-17 by Ampthill and District who finished second in the National League 2 North table.

Tries from Alexander Bloisi, Joseph Tarrant and Maama Molakita gave the A’s a 21 point lead at half time.

Port came flying out of the blocks after the break and once Simon Green and Elliot Fletcher had touched down either side of William Goodge’s try for Ampthill, the hosts were right back in this contest

However, a score from Brendan Burke re-established Ampthill’s comfortable lead.

Paul Millea dotted down for Stockport, but further tries from Tarrant, Darrell Dyer, Karim Lynch and Lee Anker showed why Ampthill have been one of the strongest sides this campaign.

Stockport coach Matthew Bebbington said: "It was a very good performance considering we are relegated and don’t really have much to play for. Also Ampthill are second in the league and could’ve won the title and it would’ve been easy for us to roll over, but I’m very proud with the performance.

"We got a few things wrong, but we scored three cracking tries and I’m really pleased with the attitude and the application of the players.
"I think we have played better rugby this season than we did the last time we were in this league. It’s just the fact we are coming up against teams that are financially much stronger than us and that’s difficult.

"We just have to stick to our principles and we know that can trouble all of the teams in National Three next year."

Despite the scoreline, this was a very competitive performance by Stockport who knew before the match that they were relegated and that Ampthill had won 26 out of their 29 games this season.

The A’s were also still in the hunt for the title and knew they had to win and Hull Ionains had to pick up two points or less away at Caldy, for Ampthill to be crowned champions.

Although they put in a classy and professional performance, it was the team from Humberside that were automatically promoted to National One.

The away side looked in control when Bloisi opened the scoring on 7 minutes as he bundled his way over from close range. Fly-half Tarrant kicked his side into a 7-0 lead with the conversion.

Ampthill were proving a serious threat in attack, but their defence was outstanding all afternoon as they forced Stockport back when the hosts had possession.

Port did well to contain Ampthill for the majority of the first period thanks to good scrummaging and excellent work by the forwards, but on 29 minutes that resilient defence was carved open. Tarrant scored a brilliant individual try as he skipped past three Stockport tackles and it wasn’t a surprise to see him slot over the extras.

Try number three was just around the corner as the huge figure of Molitika glided his way through a ruck and waltzed his way unopposed under the posts leaving Tarrant with another simple conversion.

Ampthill were completely in control at half-time and the victory, which they needed, looked firmly nailed on, but Matthew Bebbington’s side were not going to finish the season without putting up a fight.

Port came out with a different approach in the second half and on 44 minutes, Green forced his way over, capitalising on scrum-half Will Batterbury’s cleverly taken tap-penalty.

However their effective offensive work was undone straight from the restart as centre Goode charged down a Port kick deep in their own 22 and picked up the loose ball to give his side a 26-10 advantage and secure them a bonus point.

It was then Stockport’s turn to hit back with a try themselves. A superb move allowed winger Myles Hall to be set free and a surging break saw him tackled just outside the Ampthill 22.

From there, the ball was swept right and fly-half Mike Kaciubskyji produced a lovely weighted 20 yard grubber kick which kindly hit the corner flag and bounced into the path of Fletcher, who was rewarded for not giving up on the chase.

From the restart, Ampthill continued to stretch their advantage further as Burke touched down, but once more Port had a response.

Millea, who was playing his final game for Stockport before leaving in the summer, scored from the bottom of a ruck after a great initial break by the retiring Dan Eccles. Ashley Platt-Hughes converted.

All afternoon, Ampthill’s back line was superb and they were at the heart of all four of the remaining tries.

Tarrant added points to his tally with a converted try, before producing a sensational chip through to allow winger Dyer to cross the whitewash in the corner.

Lynch and Anker round off proceedings with two more tries, but despite this win for Ampthill, they will have to go again next weekend for a place in National One as they face Bishop’s Stortford in the National Two play-off.