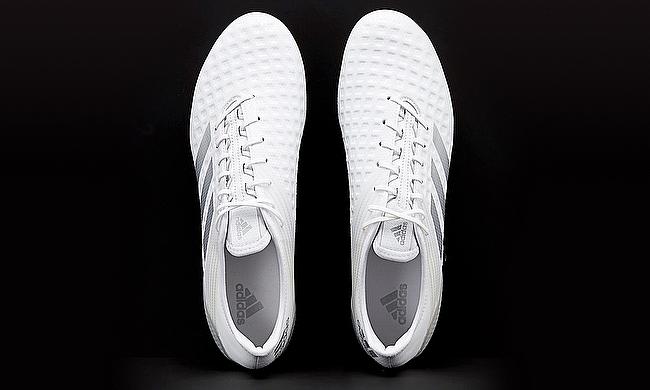 We road tested Adidas's latest model the Predator Malice Control SG, which tries to conjour up some of the magic of the original 1994 boot.

It is worth noting that the boot we are testing is an evolution of the original predator, with the Predator Control and Predator Flare specifically targeted at the Rugby market.

We are looking at the Predator Control Malice SG, white on a light grey trim.

This striking new design has the asymmetric lacing (which helps the user when kicking with the 'sweet spot' of the boot) of the original, but thats about where the similarities end.

The crisp white main body is hit with some fine details of silver which enhace and highlight certain features in a subtle but aesthetic way. The main body and toe area has a textured grip pattern running throughout, which breaks up and otherwise plain space running towards the front of the boot and aids the user when kicking.

A great looking pair of boots, with plenty of intricate detailing that adds to it's striking appearance. Although aimed at the rugby market, I don't know if many forwards will want to wear these in fear of permanent ostracising!? ...my lasting thought on the visuals (althought extremely positive), is that during the winter months in boggy/muddy/monsoon-like conditions these boots will look like any other and it will then boil down to the fit and performance.

Apart from the lacing feature of the Predator, we were keen to figure out how far these boots have come in terms of technology and styling over the last 20 years!

For the majority of Rugby playing conditons, they have incorporated a 'soft-ground' outsole which helps during the more challenging elements that you are likely to play in, along with a SPEEDTRAXION stud alignment which has been designed for maximum acceleration and agility. The outsole also features a combination of removable metal and moulded studs which are perfect for bilateral movements on natural soft ground pitches.

The heel has a sprintframe construction and has you raised at the rear of the boots by 10mm, this slight addition allows for a more dynamic running style, helping you accelerate and change direction faster.

The boot as a whole, including the sole is extremely lightweight, yet still retains strength, especially around the toe which is where plenty of stud-on-boot actions takes place. There is a balance between weight and durability to be had with this boot, an attribute well saught after as a rugby player.

The one element that hits you as soon as you put them on is the comfort they give you, they fit snugly around your foot, this works as a positive aswell as a negtive when picking sizes, be ultra careful when it comes to sizing as there is little to no addtional room for a heavy cotton rugby sock.

At times they almost felt as if there wasn't much protection or stability around the ankle area due to the construction of the heel, which is something you should bare in mind if you are used to the oldskool Patrick 10 studded monsters, you might need to think about a more subtle boot to transition into before the Predators.

These boots offer alot in terms of the weight, look and durability. They boast plenty of cutting edge terminologies/technologies, some of which you can feel with the boot on, some of which sides more with marketing patter.

Nonetheless they are the most cutting edge Rugby footwear you are likely to find on the market at the moment, but there's a pricetag which goes along with this priveledge at £170 (but there are cheaper variations available).

So overall, we think they are brilliant looking, something possibly more for the backline then frontrow... if you can foot the bill you won't be disappointed.