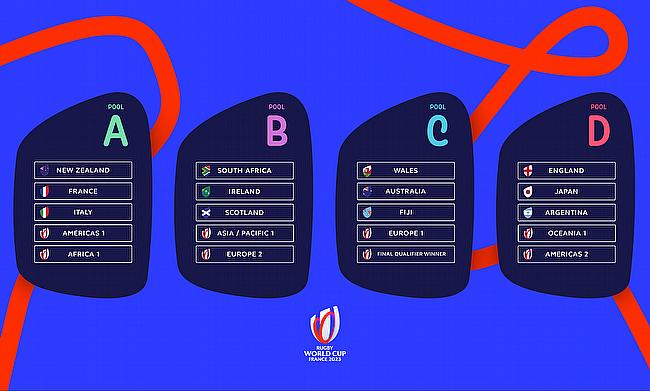 It might seem like some time away, but before we know it, the 2023 Rugby World Cup will be on our doorstep.

Many of the top teams from around the world will be heading to France to battle it out amongst themselves to claim the Webb Ellis Cup.

There will be 20 nations in total that will take part in the tournament, which will take place over the months of September and October. And whilst some teams have already confirmed their attendance, there are still numerous qualification places up for grabs. But how do teams qualify for the 2023 Rugby World Cup?

There are numerous ways to qualify for the Rugby World Cup, with the first by being one of the best performing teams at the previous tournament, which occurs on a four-yearly basis. For the 2023 tournament, that means that the 2019 Rugby World Cup almost becomes a qualification tournament in itself, with 12 teams being given entry into the next tournament. So even if you don’t win, there is still a lot to play for in every game.

It would end up being South Africa who won that tournament, beating England 32-12, with New Zealand beating Wales 40-17 in the Bronze final. All of these teams therefore qualified for the 2023 World Cup, with the remaining eight teams consisting of the remaining best ranking sides from the tournament. A full list of all twelve teams who qualified through the 2019 World Cup can be found below:

The remaining eight competitors will all qualify through other competitions, with one coming from Oceania, Asia/Pacific, Africa and a Final Qualification Tournament, and two teams from the Americas and Europe.

So far, only two teams have qualified for the tournament. The first team is Samoa who qualified as the Oceania representative, beating Tonga twice over two legs, 42-13 in the first and 15-37 in the second. However, that wasn't the end of the road for Tonga, because they then moved over to an Asia/Pacific qualifier for another chance to make the World Cup. They then beat the Cook Islands 54-10 to progress to the Asia/Pacific play-off, where they await a winner of the Asia Rugby Championship 2021 to play for another spot in the 2023 Rugby World Cup.

The second team that has qualified is Uruguay, who took the first Americas spot by beating the USA over two legs, coming from behind after losing the first leg 19-16, but turning it around in the second leg by beating the USA 34-15. But like Tonga, the USA would get a second chance in the second Americas play off. There they are to meet Chile, who after knocking Canada out in a qualifier, are on the verge of making their first ever Rugby World Cup if they are able to come out on top over another two legged affair.

The runner up from those playoffs will then go into a Final Qualification Tournament, where four teams will meet. The other three consist of; the runner-up to the Asia/Pacific playoff, the runner up of the Rugby Africa Cup 2021 with the winner of that going through to the World Cup in the Africa spot, and the third-place nation of the Rugby Europe Championship 2021 & 2022 with the winners and first runner up going through in the two European qualification spots.

That means as it stands, there are still six spots up for grabs. One from Asia/Pacific, Africa and the Americas, two from Europe, and the final spot being for the Final Qualification Tournament.

Who are the favourites for the 2023 Rugby World Cup?

Whilst not all the teams have qualified, the best ranked sides in the world are those who managed to earn one of the twelve spots from performing well in the last World Cup. According to some of the top online sportsbooks, it is the All Blacks who are favourite to win the upcoming tournament at odds of 11/4. France are then the second favourite at 7/2, with South Africa and England joint third at 7/1 each. If you are an avid sports bettor looking to place a bet on Rugby make sure to do some research and check your online sources, like this Bovada Sportsbook review, for some insights that will help you choose among many of the betting platforms offered online.

However, it’s still early days. The roster for each team will not have been picked, and there are so many chances for star players to pick up injuries, or new shining stars coming through youth ranks before then. You’ve then got the fact that the coronavirus pandemic is also popping up with new strains, so we could yet see changes to the tournament and teams taking part if the world isn’t completely back to normal by then.

Who are your favourites for the tournament? Which teams will fill in the final qualification spaces? Let us know your thoughts on the upcoming 2023 Rugby World Cup in the comments below or on our social channels.