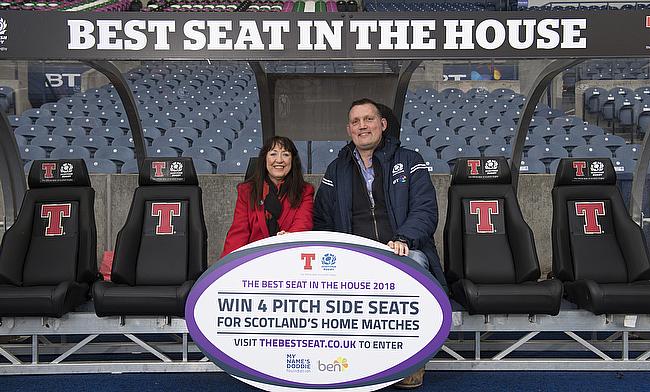 Innovative ways for Rugby stars to raise money for Charity

The official beer of Scottish Rugby, Tennent’s Lager, raffle off 'Best Seat in the House' at Scotland's home internationals for charity.

Scottish Rugby icon, Doddie Weir, was joined by Chris Gardner of The BEN charity as Tennent’s Lager launched a charity raffle to give away the ‘Best Seat in the House’, a six person dugout just yards away from the pitch for Scotland’s home matches during this year’s NatWest 6Nations.

Winners will get a once-in-a-lifetime match day experience for the game against France on 11 Feb and the Calcutta Cup clash against England on 24 Feb. Proceeds from the raffle will be split between the Scottish drinks industry charity, The BEN and the My Name’5 Doddie Foundation, one of several charities supported by Scottish Rugby.

Sat metres away from the Scotland bench, and joined by Scottish a rugby legend, the lucky winners will walk through the BT Murrayfield tunnel before taking their seats and enjoying cold beer and snacks throughout the game. The chance to win these incredible seats for two sold out matches make this a truly money-can’t-buy prize.

Tennent’s chosen charity, The BEN, offers financial, social and emotional support for the members of the Scottish licensed trade across Scotland who have come up against hard times. The My Name’5 Doddie Foundation was established to support research and awareness of Motor Neuron Disease, a condition which last year Scottish Rugby icon Doddie Weir announced he was battling.

Raffle tickets can be purchased now for £5 via www.thebestseat.co.uk, with the option to buy a specific number of tickets or a bundle of 5, 10 or 15. Additional prizes available also includes Scotland shirts and balls signed by the team.

“It was a very exciting Autumn Tests and that sometimes gives you an indication as to how the Six Nations will go. Two out of three victories, it could have been three against New Zealand if the game had another five minutes, but the boys’ commitment was unbelievable. A world-record score against the Australians, so we’re setting things up for what’s going to be a very interesting and exciting Six Nations. You can see that as well, with the two games at home already sold-out a month before the game. The way we are competing, it’s going to be a very interesting, exciting and hopefully triumphant Six Nations this year.

“With Tennent’s doing Best Seat in the House, with the backing of Scottish Rugby, someone has the chance to be right near the thick of things. This gives a fantastic opportunity for someone to be right next to the players who are warming up, you can hear the coaches, you’re ten yards from the pitch and if it rains, you’ve got a hood here. Some people are going to have some amazing seats and off the back of that, there’s a couple of lovely charities who are going to benefit from that.”

“Tennent’s Lager has been a long-standing supporter of Scottish sport, and to be working in partnership with Scottish Rugby to give fans this incredible prize, while raising vital funds for our chosen charities is a great way of marking that.

“The Best Seat in the House is a real money-can’t-buy experience, so we’re encouraging Tennent’s drinkers and rugby fans alike to dig deep to be in with the chance to win. With both matches completely sold out, and off the back of an exciting Autumn Test series this prize couldn’t come at a better time and we hope to raise a good sum of money for The BEN and the My Name’5 Doddie Foundation.”

"Our thanks go to Tennent’s and Scottish Rugby for supporting this innovative fundraising idea, which will help both My Name’5 Doddie and the BEN to raise awareness and funds to carry on our vital work," said Chief Executive of The BEN Chris Gardner.

“We’re delighted to see this innovation from our partner Tennent’s, which brings a new dimension to Best Seat in the House. The raffle winner can enjoy a special day at BT Murrayfield, safe in the knowledge that they’re also supporting some great charities," said Scottish Rugby’s Chief Operating Officer Dominic McKay.